Components form the fundamental building blocks of the interaction builder platform. Appropriate selection of components is key to successfully building voice responses capable of delivering an individualized experience for the user. Data Branching is a multifunctional component that aids in a three-fold pathing within an interaction flow. The core functionality of this component is to process a query from a given database and address three types of values, namely none, one, and many within an interaction model. The yellow color assigned to the Data Branching card suggests that it is a condition or decision-making component.

This comprehensive guide outlines the anatomy before progressing towards the configuration of the Data Branching component within an interaction flow. To help you get started, the user-centric guide, on the whole, delineates the purpose along with its relevance within a session.

Navigate to the interaction builder platform of VOGO Voice to access the Data Branching under the Components section. Click on the component, then drag and drop it onto the flow canvas.

Click the Edit symbol on the top right-hand side of the component card to configure it and curate the desired voice responses reflecting the three possible solutions: none, one, and many.

Purpose and Relevance of the ‘Data Branching’ Component

Data Branching, one of the conditional components on the interaction builder platform when executed, performs the decision-making process crucial to the interaction flow. Its function is rendered by way of querying and producing the output of three possibilities based on the data path configured within the value field of this component.

The Configuration window offers the ability to input the path of the array of objects that is to be queried within a single value field, an example of which is illustrated in the screenshot below. When called to action, this component determines whether the resultant output has zero values, one value, or more values based on the selected path put to test. Additionally, in the adjacent field, select from its drop-down list the relevant data type of the set value as shown below. To know more about data types, click here. 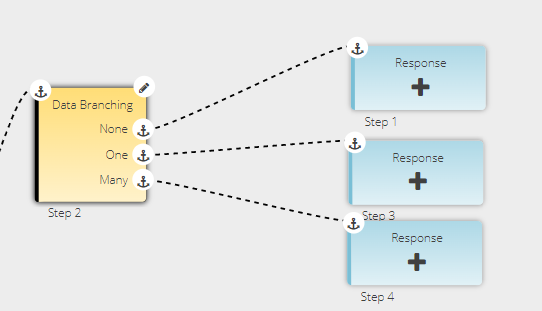 The implementation of the three possible solutions by means of the Data Branching component allows creating a multipathing branching of the flow presenting the queried output result as none, one, or many objects. To simulate a similar scenario but without the Data Branching component would require the inclusion of two Check Variable components to replace the function of a single Data Branching component besides other relevant counterpart cards to fulfill the interaction. Simultaneously Skill Designers can also opt for the use of the simplified {#if}} {{else}} {{#if}} template condition to create the same intended result to present the three expressions of possibilities. Thus the use of this singular component replaces the use of a template or Check Variables, depending on the alternative chosen.

The underlying working of the Data Branching card emulates the principle resorted to in programming languages while dealing with a variable that holds no object, one object, or many objects. Also, it closely resembles the analytic idea put to effect while determining whether an algebraic equation has one, infinite, or no solutions.

Tags: configuration data branching many none one
Was this article helpful?
Like 0 Dislike 0
Previous: If/Else
Next: Speech Synthesis Markup Language (SSML)